Through a quick role-playing game, participants will understand that depending on different features, we are not all equal in terms of access to online information and moreover access to digital tools.

Through a cooperative game-based objective, participants will become familiar with the following ideas:

Participants will play the role of a person with specific characteristics (see annexes). Depending on the situation, they will have to make choices based on what their character can or cannot do.

Here are the rules of the game: From the profile cards that you will have filled in advance using the document in annex, participants will have to judge if the character that has been assigned to them is able to complete the action that the facilitator will read out loud. If the participant think they (i.e. their character) are able to complete the action, they can move one step. If not, they don’t move. The objective is not to come first but to allow participants to better understand that some people have privileged access to the internet and to connect the exercise to their personal lives. The activity can be done individually or in groups. Here is how it should go:

The tips listed with each character profile will help you.

A user over 13 will have likely developed a strong competency in internet use. Officially, 13 is the minimum age for signing up to Instagram, Snapchat, Facebook or Twitter. Depending on the country, someone under 13 signing up to one of these platforms may nor may not be illegal. If an underage user is flagged, they risk having their accounts closed. Example on Facebook.

Residents of cities like London, Dublin or Paris will not have any problems regarding internet access. This is not the case for someone in Green Bank, West Virginia, where wireless (but not wired) internet is outlawed due to the presence of a high-tech government telescope. There are many other examples of places in the world – often remote – with limited or no internet access. In Vietnam, internet is strictly controlled. Social media is heavily scrutinised and messages of political dissent are censored. China is the country that censors the most in the world. In China, Facebook, Twitter and YouTube are blocked. Chinese equivalent services do exist (Sna Weibo, QQ, RenRen and WeChat for example) but these have automatic filtering systems. The network giants who own these services (Baidu, Tencent) practice online censorship (or ‘information control’).

The majority of online material as we know it in the west is in English. An anglophone user can access and understand a vast amount of information. French (just an example) is the most used language on the French internet. A francophone user can access a large amount of information. A bilingual user has the advantage of being able to access information both in English and in French. A user being able to only speak a less common language – such as say, Estonian – can only access a relatively small amount of online information. Chinese (Mandarin) is a particular case there is an enormous amount of content in this language which has the most native speakers in the world, while China censures the most content of any country.

A user having a physical disability like blindness or deafness cannot access all online content since most material contains important audiovisual elements. Some services will convert displayed text to speech or describe the visual elements on the screen. There are also brail keyboards that blind people can use to go online. There are also subtitling tools to display words describe sounds so that a user who is hard of hearing can access online resources.

A user from a median or high income household can afford to have internet access in the home, where someone from a low income background cannot. It would be more difficult for the materially disadvantaged individual as they would need to go elsewhere to get online (e.g. at work, at a café, at the library). 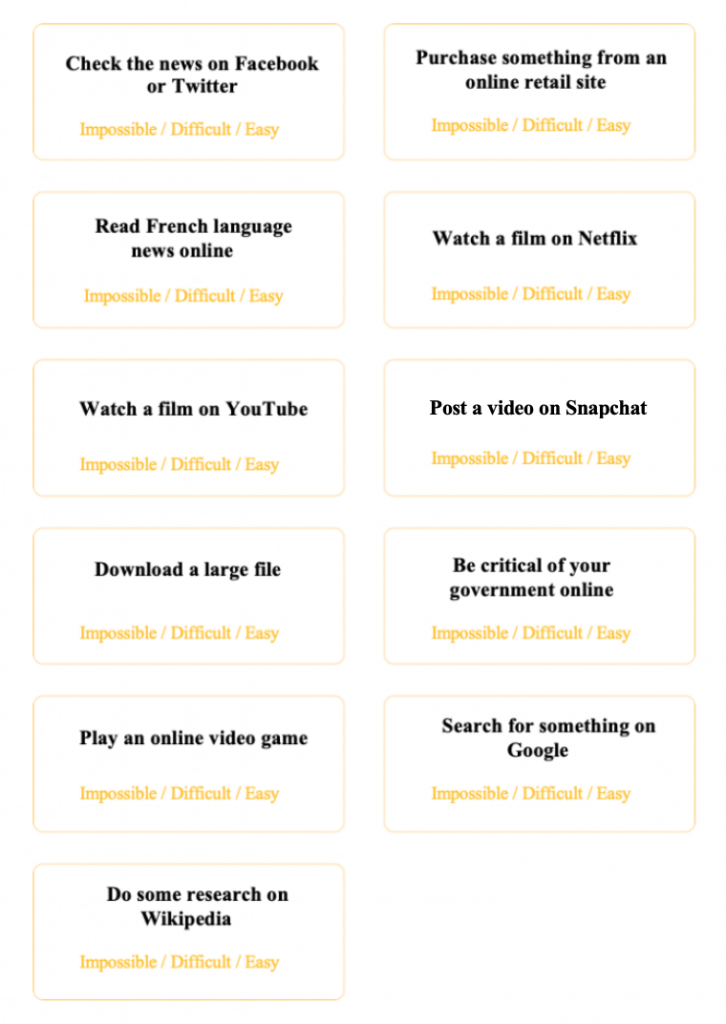 Each character is defined by following:

The asterisks on the sheet indicate the ease of internet access: