Back to Library > Communication & Collaboration> 2.5 Netiquette

A workshop based around a debate on freedom of expression and respectful behaviour online.

Through two activities, the objective of this workshop is to have participants consider notions regarding freedom of speech and respectful online behaviour. There will be a walking debate on what we can and cannot say online, then on the broader subject of freedom of expression and the laws that exist to protect it.

Start off with a walking debate to consider what can be said or not on the internet. This will help establish some ground rules and get a sense of the participants’ level of knowledge. To facilitate this, print the provided materials below, cut out the statements and put them in a hat/box/container from which they will be drawn randomly and read aloud for the rest of the group. Then the debate can begin.

What is a walking debate?

This is a debate in which participants will play a physical role. They will move around depending on their response to a given statement (agreement/neutral/disagreement). For example, to respond ‘yes’, they may take one step forward. For a neutral response, they could stay where they are and for a disagreement, a step backwards. Simple right? Prior to the statement being made and while participants are responding through movement, they should not speak in order to not influence each other. After the decisions are made, invite the participants to express their view on the question asked by explaining why they moved the way they did.

Facilitation tip: The statements listed below are examples tested by our moderators. We therefore know that they are good examples for debate encouragement. This shouldn’t stop you from coming up with your own ideas! However, we would advise you to choose statements that don’t have a clear response (in order to encourage the debate) and particularly to test them beforehand (with colleagues, friends, family) to ensure that they work well for this type of activity. 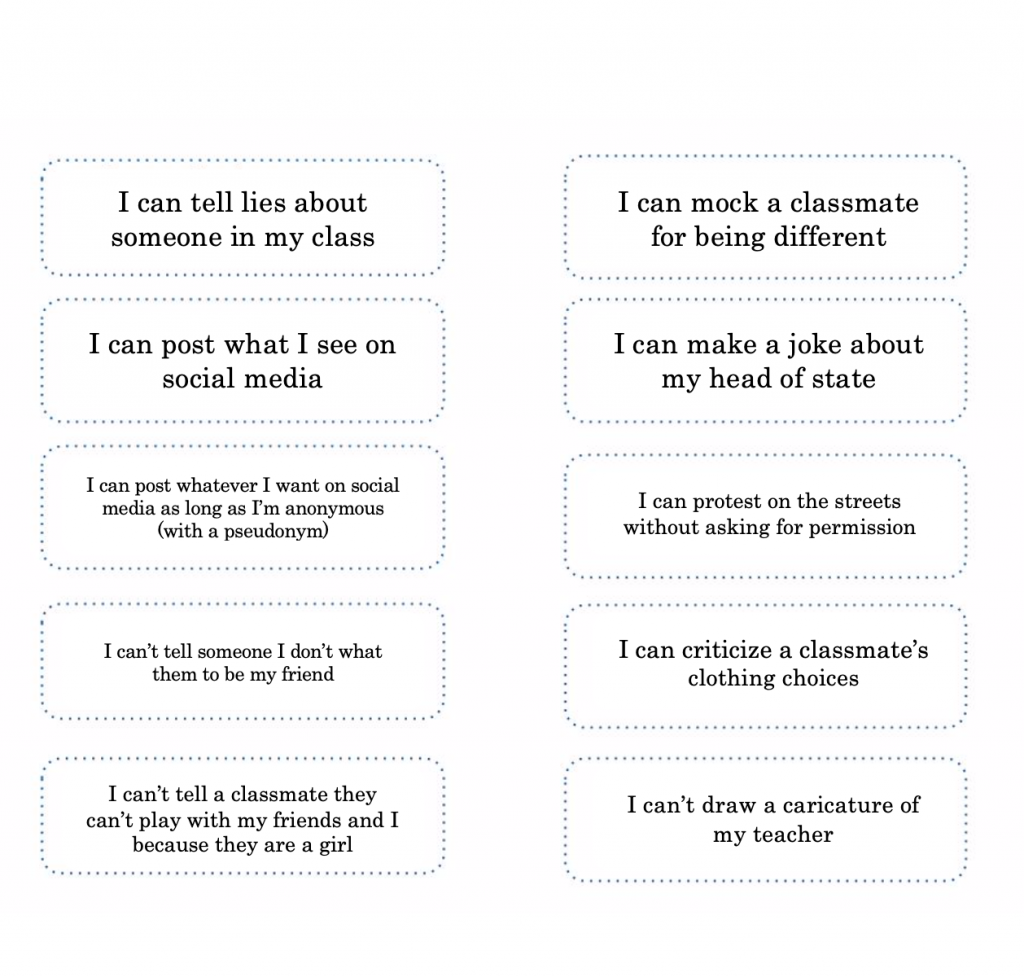 Definition of freedom of expression and its limits

For the second part of the workshop, focus on the definition of freedom of expression. Each nation-state will have its own definitions but for the sake of this workshop we will take the definition from the UN’s Universal Declaration of Human Rights.

Article 9 of the Universal Declaration of Human Rights.

Everyone has the right to freedom of opinion and expression; this right includes freedom to hold opinions without interference and to seek, receive and impart information and ideas through any media and regardless of frontiers.

Ask participants if they understand the definition. Explain that this definition is from the UN’s Declaration of Human Rights, which, although part of what is referred to as international law, is not legally binding. The article includes 30 articles conferring rights for every individual, including the right to shelter, to a nationality, to not be subject to torture, and to have freedom of expression. For more information, see Wikipedia. Explain that in many countries, there are limits imposed on freedom of expression. We will provide the example of France here but feel free to change this for the country in which you are giving the workshop. These 4 limits of the freedom of expression are stated in France’s constitution:

To put these rules into practice, divide participants into four groups and attribute to each group one of the four limits listed above. There will be therefore:

Print the material below and place them on the centre of the table. Each example contains a phrase or a case corresponding to one or several of the limits. Each group must check the material and take the examples that concern their assigned limit. They can of course reflect all together! At the end of this workshop, each group should say out loud the statements that concern the limits assigned to them and explain why.

Instead of organising the work in groups, you can also do this activity collectively. On a whiteboard or other writing surface, draw 4 columns, one for each limit. Give out the examples one by one until there are none remaining. Each participant should come to stick the example(s) they have been given to the right column and explain why. 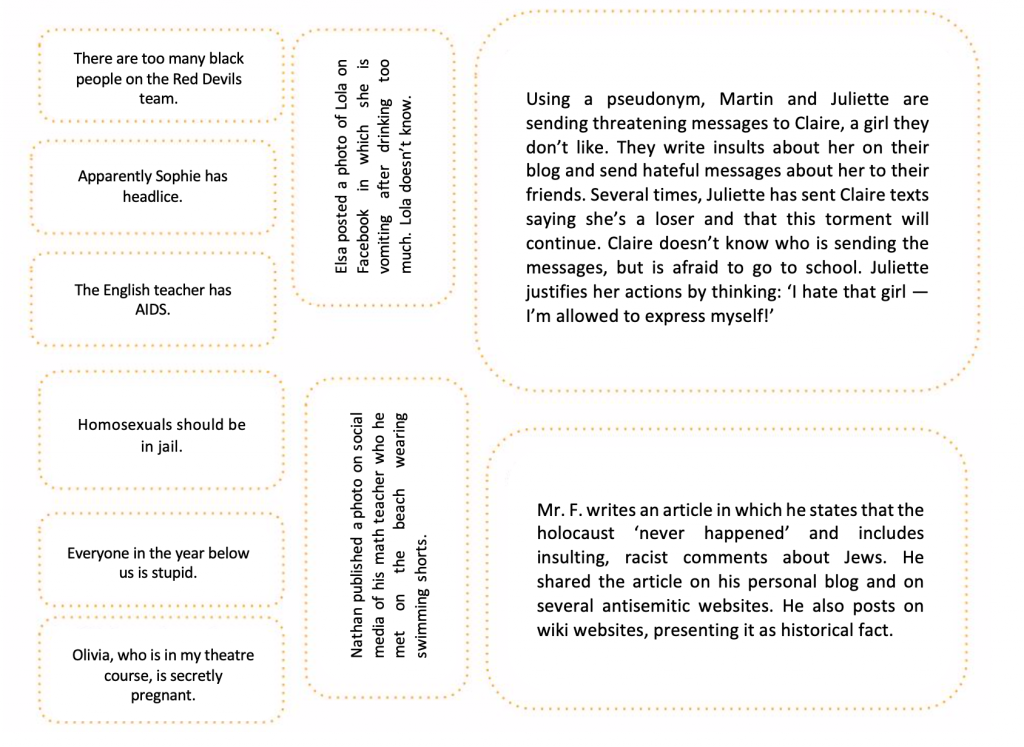