Through guided online research, this workshop will help participants to identify hidden and subtle online advertising. By doing this they will become familiar with a wide variety of advertising.

With this workshop, participants will learn to recognise a wide variety of kinds of advertising on websites, social media etc.

Facilitation tips: You can find out more on the ideas elaborated in this workshop through the information document ‘Personal data‘

Indentifying ads on a search engine

Ask participants to define advertising in the context of journalism. Allow a few minutes for reflection before presenting the following definitions: Advertising aims to attract a target’s attention – the consumer – to encourage them to buy a product or to adopt a certain behaviour. Journalism has the goal of assembling, verifying, reporting and annotating facts. These definitions being clarified, the workshop can begin. Ask participants to search on four different search engines:

Looking out for the following ad-relevant information:

It can be sometimes difficult to spot ads on search engines. They often have the same form as other links and may also differentiate themselves from other results with a tag reading ‘ad’ or ‘sponsored ad’. Example : 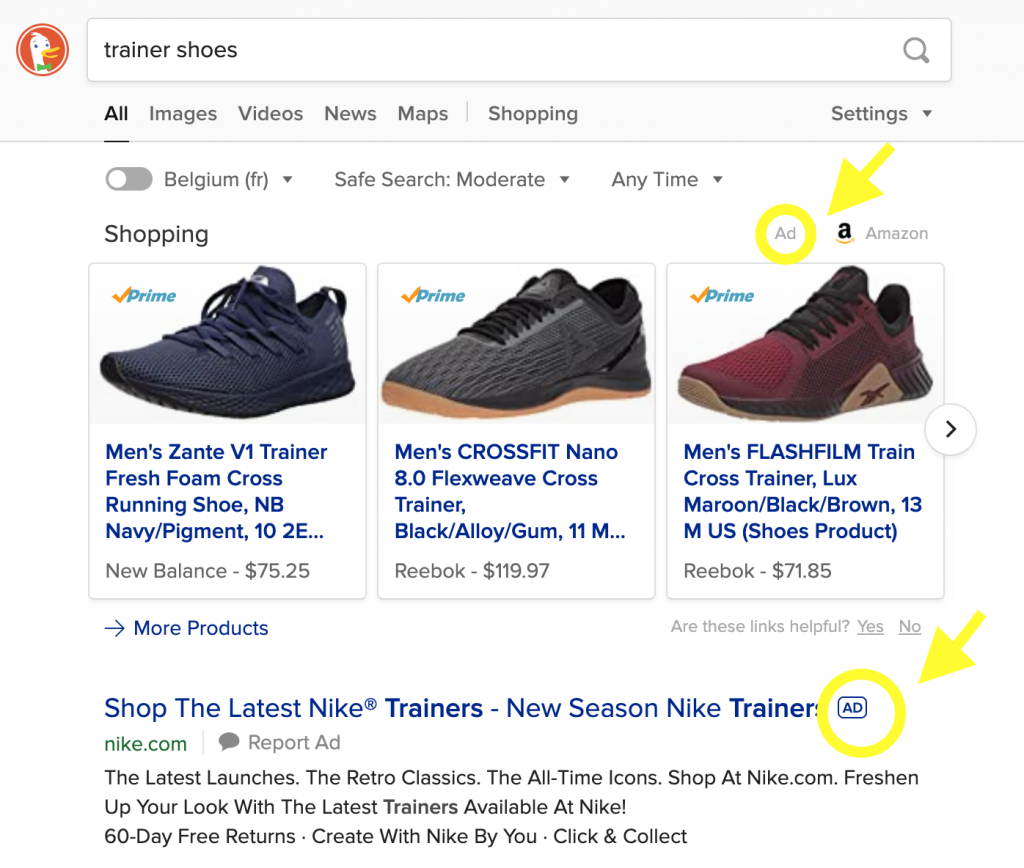 If the group members searched on their own computers or smartphones the ads will vary. It is not always easy to demonstrate this on search engines since, from one search to another, ads can be displayed differently.

In groups of three, ask participants go to a media website, preferably the same for all, for example https://www.theguardian.com/international. Each group should attempt to find three prominent ads displayed on the page. They should write the following information for each:

Ask each group to say which ads they were able to observe. This experience will show that each group received targeted ads depending on the smartphones on which the search took place.

In order to counter the rejection of advertising by internet users (for example by using ad-blocking software, tools expanded on in the activity ‘Economy of the Media), advertisers have since 2012 developed the concept of native advertising. This practice consists of producing ads by adopting journalistic codes, e.g. in the form of an article or video. If not enough attention is paid, a lot can be done to disguise the ad as a legitimate journalistic article. Display on the projector the following article from a subsidiary of Vice Media: https://hostedby.vice.com/hosts/artwork/south-london Ask the group what the relationship is between South London culture and Airbnb.

Answer: none. This article is a good example of editorial advertising: it adopts journalistic and editorial codes in order to increase the visibility of a brand.   Do the same exercise with the following three articles on the subjects of Lifestyle, Interior Design and DIY:

Ask the group what the relevant point is in common is between these three articles. If they don’t see it, ask them to look for strange or out of place elements that don’t appear entirely relevant to the article.

Answer: Each of these articles, to varying degrees of subtlety, is sponsored by The Home Depot.

Now ask participants to check Forbes Magazine’s Brandvoice campaign ‘The Great Rewrite’. Show the home page and ask who sponsors this campaign which is designed to explore, from an ostensibly objective viewpoint, ‘profound trends that are rewriting the way we work and live’.

Youtube publishes the most native advertisement examples of any website. Countless Youtubers are paid by brands to include advertising in their videos. Despite clear rules to signal advertising content, it often remains difficult to spot hidden ads on Youtube. The absence of clear signalling means that it is often ambiguous whether a video contains product placement or has been sponsored directly by a brand.

Show the following video: HALLOWEEN ’90s SUPERMODEL MAKEUP TUTORIAL FT. EMILY DIDONATO + ERIN PARSONS | MAYBELLINE NEW YORK and ask the group what gives away the fact that it is an advertisement.

Answer: We know that the video is an advertisement due to the number of makeup products that appear. However the content is deceptive as nothing in the video formally indicates it is in fact an advertisement. Note:

Sometimes ads are not hidden but can be subtle. See for example, the YouTube channel Unbox Therapy, which purports to provide objective product reviews in the domain of technology. In this video, viewed over 3.5m times, the host reviews an Apple Watch product. The video is sponsored by BandWerk which produces ‘luxurious leather straps’ for Apple watches. Show the video cited above and ask the participants how they can tell that the video is sponsored. No mention of advertisement is mentioned until 8:06 when the sponsorship message begins. If you want you can show the first minute or so of the video and then skip to the end for the sponsorship. Note that the description also includes the note ‘Sponsored by BandWerk’. Mention that the fact that this company is involved closely with Apple Watch may conflict with the idea that the host is providing a totally objective review of the product. What appears to be a simple sponsorship deal may in this case lead to deeper implications in the subtleties of YouTube advertising.