This offline workshop will use role play to demonstrate how a robot works. Participants will learn the relationship between sensor, algorithm and effector. They will learn how to break down one’s thinking into a sequence of actions.

Tape some sheets of paper together and place them together on the table in order to have a relatively large drawing areas (it doesn’t necessarily have to be a rectangle or square).

Start with a short exercise to show the purpose of sensors. Gather participants around the table and ask them to draw (on the sheets prepared) a simple route with two or three turns, one crossing and one dead-end. 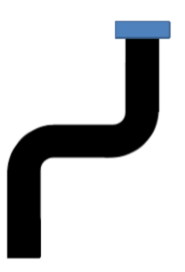 Ask a group member to drive the toy car down the route while narrating its movements (‘I am following the road’, ‘I am turning right’, etc.) and stopping if it either reaches an obstacle or the end of the road. Ask why did the driver turn right, stop, etc.: because they followed the path before them. How did they know there was a turn, obstacle, etc.? Because they saw them – they sensed the information with their eyes.

Continue with more guided questions to explore further the notion of sensors. Ask participants to put their hands on the table, close their eyes and find the edge. How did they do it? Which sense did they use? Explanation: through touching, they detect the edge of the table and conclude they have to stop moving their arm. Think about what might serve as a sensor in the car. Explain that the toy car can use wheels as sensors, i.e. whether or not a wheel touches the road. Add that the car can detect obstacles by calculating the distance they are from the wall. If you have a rangefinder, have them measure the distance from the nearest wall. Now repeat the car exercise, this time having them describe the action of the sensors: the car moves forward as long as the wheels are on the road. If a wheel moves off the road, it means there is a turn and that the steering wheel needs to be rotated. If the car detects a wall, it knows it has to stop. Participants should next play the role of the car’s sensors: raise the left hand when the left wheel exits the road, raise the right hand for the right wheel. They should understand that when the left wheel goes off-road, the car needs to turn right, and vice versa. Repeat the exercise for a few minutes until the group have mastered the chain between the detection of an event (sensor), the decision taken (algorithm), the action (turning the wheel or braking, i.e. the actuating motors), and the result obtained which is to either to return to the road or to stop at a wall.

Emphasise the progression that just took place: detection by the sensor, decision taken, action. Underline that this is the same thing that happens with robots. The only difference is how the sensors work (pressure, camera with image analysis, laser, gyroscope, etc.). Make the connection with the knowledge the group already has on algorithms: what kind of algorithm might a robot’s operation be based on? Algorithms are required for processing the information captured by the sensors (image analysis, measuring of the distance recorded by the laser, etc.) taking decisions and for operating the motors/actuators (turning the wheels, accelerating, etc.).

Clarify these notions through the following experiment. Write the algorithm on the board and repeat the previous exercise, following the progression on the board step by step:

The driver can have their eyes covered (so they can’t see the route) and the person who manages the algorithm should have their back to the circuit. 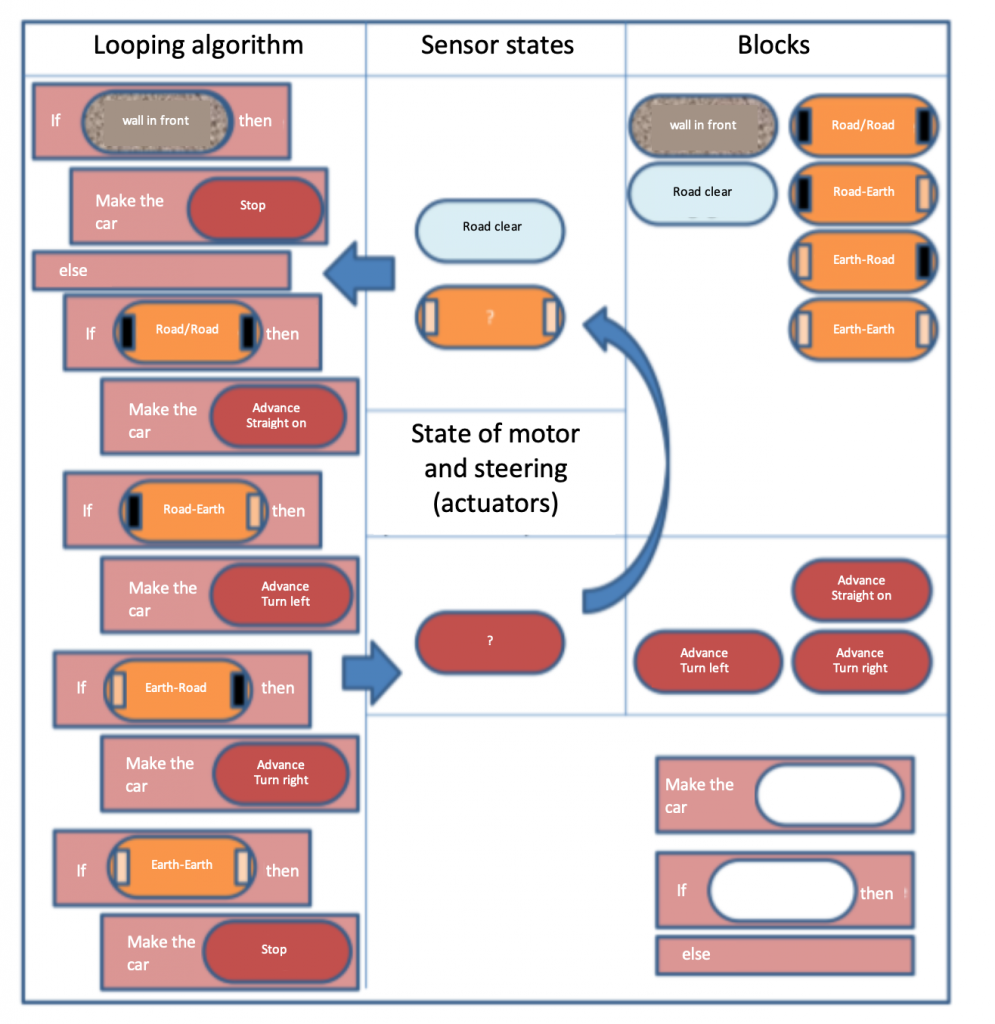 The group will be now able to understand how simple robots work and move on to related activities. You could also at this point follow the first levels of Blockly Maze to develop understanding of notions of spatialisation and programming.