We will create a game centring on the piloting of a helicopter to avoid obstacles. The player will need to collect fuel or the helicopter will crash. Each time on obstacle is touched, the player loses a life, represented by a heart. If three lives are lost, the game is over.

Creating a backdrop and adding sprites

Delete the Scratch cat (the default sprite) — we won’t be needing it for this.   1. Add a backdrop. For example, ‘Stars’ from the category ‘Space’. 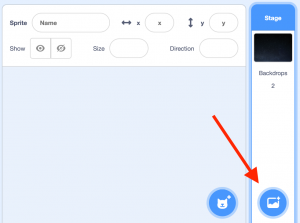 2. Add a helicopter and another sprite, for example a wizard’s hat can represent fuel. In this example we have taken Helicopter sprite from pixabay.com and uploaded it to Scratch, while the Wizard Hat is directly from the Scratch library. 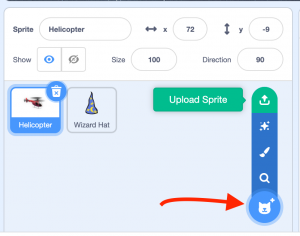 3. We now need to create the obstacles, in this case the rocks. Two will come from above and two from below. Give them the same costume.

Rename them Rock 1, Rock 2, etc. 4. We will also create a ‘heart’ to represent the helicopter’s lives. Here we have used ‘Heart’ from the Scratch library. 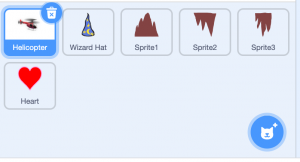 5. Adjust the sizes of the rocks so that the helicopter can pass between them. 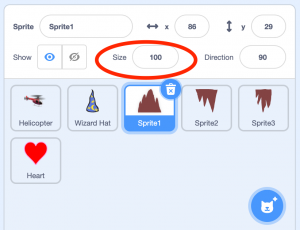 1. The following script mean that a rock will appear every 1 to 3 seconds. It will disappear once it reaches the edge of the scree. Add the following blocks to Rock 1:

When the green flag is clicked, the rock disappears, waits between 1 and 3 seconds, reappears (‘show’) at the right of the screen (x= 300). It then advances towards the left of the screen until it reaches the left edge (y= -250). Once the left side is reached, the loop repeats indefinitely.   2. Duplicate the script for the three other rocks. Place the rocks correctly on the screen (two below and two on top). Test the script by clicking the green flag. Make sure the rocks scroll at random times from right to left.

Here we will create several scripts. Four to direct the helicopter and one to lose fuel every 0.1 seconds (to quantify the gas realistically).   1. Create the following scripts to move the helicopter with the directional arrow keys: 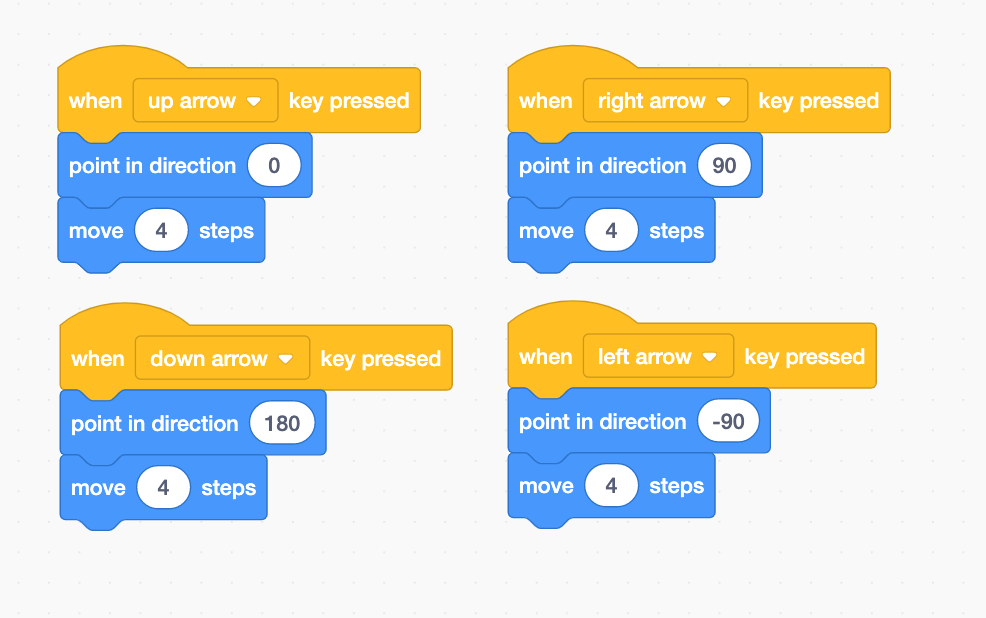 When the up key is pressed, the sprite points up and moves.

2. We will now make it so that the helicopter loses altitude and fuel as the game progresses. Write the following script: 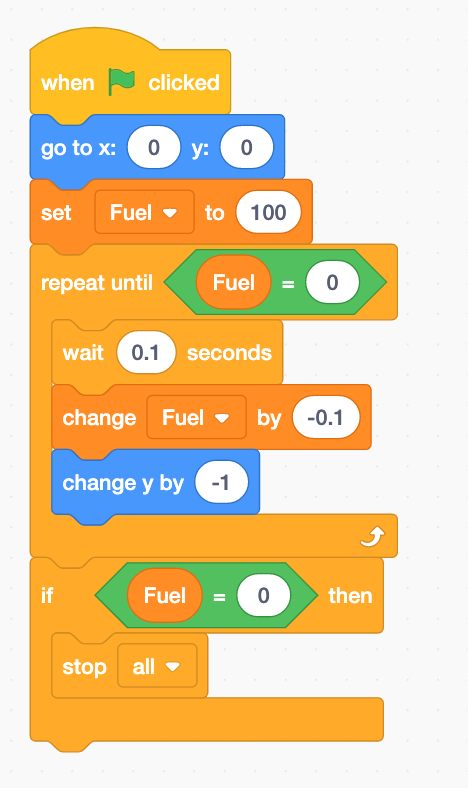 We now need to implement a life count system. 1. In the stage’s script (click on the stage area in bottom right of the screen), create a variable ‘life’, applied to all sprites, and copy the following: 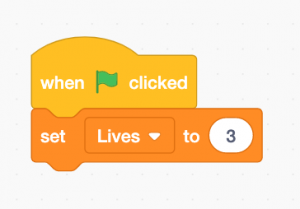 2. Next, we need code to hide the hearts as they are lost. Copy the following to the heart’s script: 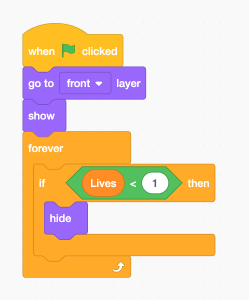 When the green flag is clicked, the heart appeared in the front layer of the stage, meaning that it won’t be hidden behind any other elements, then will appear. The program then constantly checks if the variable ‘Lives’ is less than 3. If it is, the heart disappears.
3. Now we need to duplicate the heart twice. For the second, change ‘If Lives < 3’ to ‘If Lives <2’, and for the last heart: ‘If Lives < 1’. 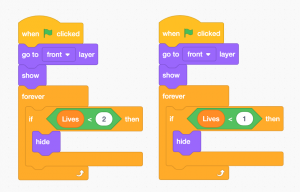 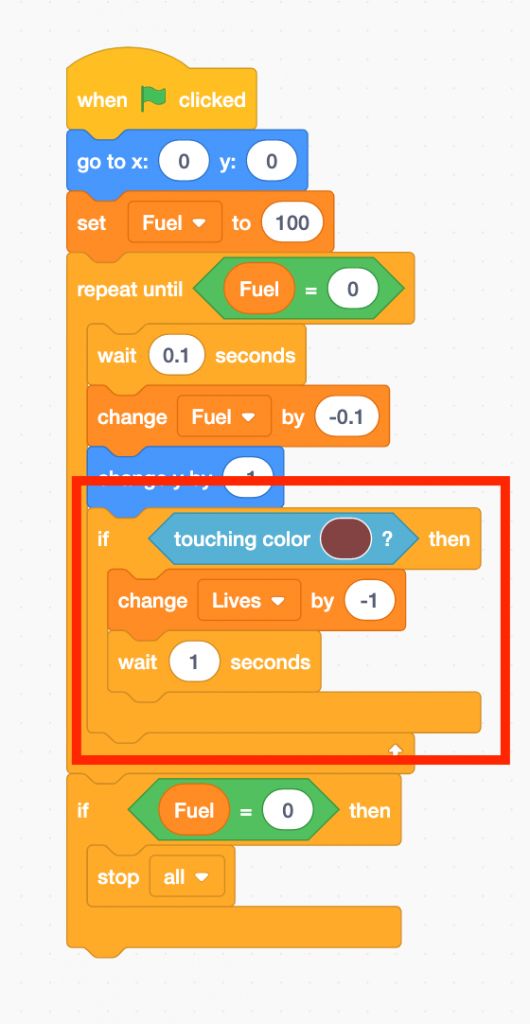 If the colour of the rock (brown here) is touched by the helicopter, one life is lost, and another life cannot be lost before one second passes.

After a hit, one second elapses so that the helicopter has to time to move away.
5. Finally, the variable ‘life’ needs to lose value. Each time the helicopter touches a rock, the number needs to decrease by 1. Add the following blocks to the helicopter’s script so the game stops when ‘Lives’ reaches 0: 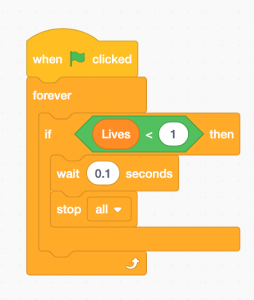 When the green flag is clicked, the program will constantly check is the variable ‘Lives’ is less than 0. If it is, the program waits 0.1 seconds (time to allow the last heart to disappear).

1. If you have tested the game, you will have noticed that even without touching the rocks, you cannot go very far as the helicopter consumes gas. We will need to implement the ability to recover fuel. Regarding the sprite you have selected to represent fuel (Wizard Hat for example), it will increase the Fuel variable when touched. Copy this to the Hat’s script: 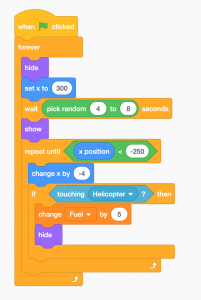 You can improve the game by doing the following: