The facilitator shows videos and pictures of an imaginary character (in French, ‘Le dahu’), and the participants (children) try to call him. But of course the imaginary character never comes. This raises awareness around video and photo manipulation.

Employing the Dahu myth, the workshop introduces the concept of fake news to children and that we should not believe everything we see online! We should always verify our sources. This workshop will have 3 phases:

Facilitation tips: This workshop works very well with children between the ages of 5 and 8. Beyond that age it will be difficult to get them to believe your story. Feel free to show as many photos and pictures as you can to support the story. You can then later discuss the fact that photos can be altered, so we mustn’t believe everything we see. Here is some information on the Dahu myth:

To start, tell the children about dahu, making them believe it really exists! For this, ask a few leading questions, such as: ‘Have you heard of the dahu? No? It’s a majestic animal that looks like a small goat’. 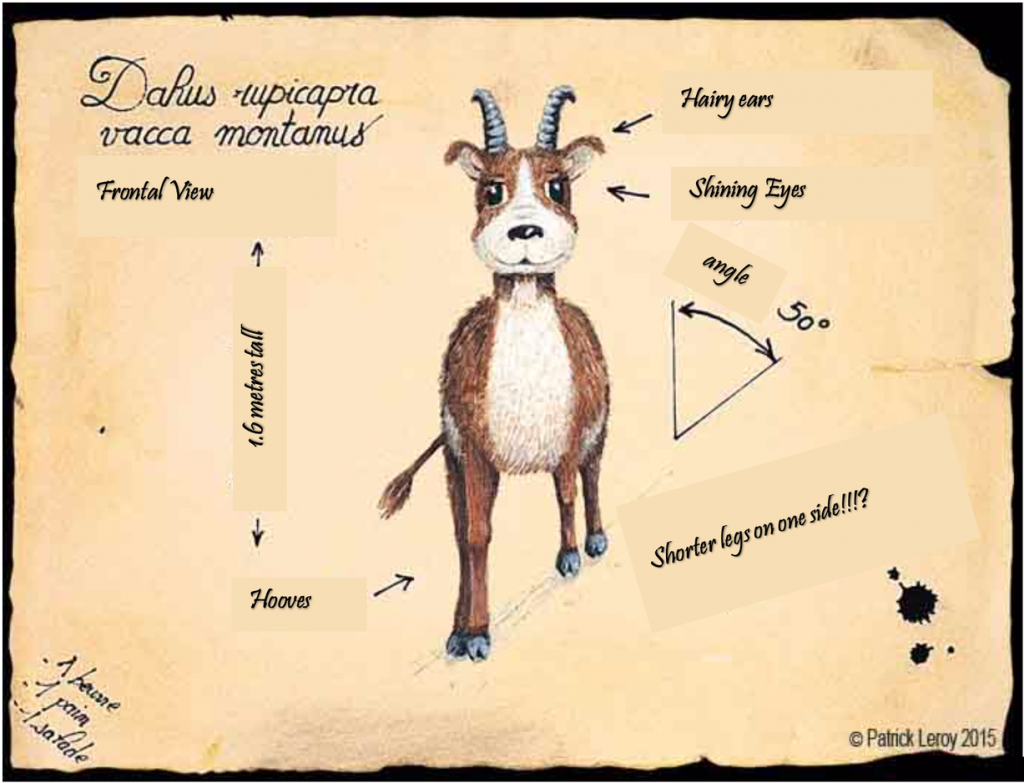 Show participants the image: Show them the above image or others you can find by doing an image search. The more images you can find the better to make the story convincing. Ask the group if they see notice anything strange about the animal, what it might eat, where it might live, etc.

Ask them if they have already seen it Some will probably doubt what they see, others will already be tempted to search for it. Maybe some will want to make the others believe they have already seen one. You should improvise depending on participants, for example by quickly introducing the activity and showing them that there are so many hunting techniques that they will never have tried what they will do today.

Invent and tell them a story The facilitator should not hesitate to embellish the story, personalise it and tell it with conviction:

‘The dahu is a nocturnal animal that lives in the mountains of France and Switzerland. It has shorter legs on one side to help it navigate the mountainous landscapes it inhabits. Dahu hunting has strict rules and generally takes place at night. There is an estimated 30% chance of seeing a dahu on a hunt if the climate and location are not right. People who have seen one describe it like a hallucinatory experience. This may seem scary but don’t worry, the dahu is known to be docile when approached by humans.

This animal has a peculiar and intricate sense of hearing. It is attentive to everything it hears in the same way as other animals (dogs, cats, etc.). It is thought that it is the hairs on its ears that make its sense of hearing so strong.

This is why, when trying to see one, we will try to produce a rhythm that dahu will detect and judge to be right or wrong. It’s during this activity that you might be able to see one. Be attentive.’

Setting up Place several chairs in a line, side by side, so that participants can sit facing a wall or something they can fix their gaze on. The leader will choose a theme and the others will think of a sound (with or without sounds) related to that theme. Movements can be added to make the exercise more difficult. One by one, following the leader’s guidance, they will be able to make sounds and gestures in a loop in a such a way to keep a certain rhythm, without looking at each other.

For example: If we choose the theme ‘car sounds’, could lead to the following: P1: imitates the acceleration of a car with their hand: ‘Vroooom!’ P2: taps their foot on the floor ‘Eeeeeeeh!’ (simulating a screeching tyre) P3, honks an imaginary horn: ‘Beep beep!’ P4, waves their right arm: ‘tick, tick, tick, tick’ (noise of an indicator) Then P1 picks up after P4 etc. The goal is to look straight ahead and to rely on keen listening. The leader is free. Start in a way to make it easy, increasing the complexity as the rhythm is correct.

Concluding discussion: The dahu! It still didn’t arrive? Why not do you think?

Leave the group time to think and debate between themselves and feel free to suggest some ideas to nudge them in the right direction. Now it’s time to reveal the truth! You can explain the point of the workshop after the reveal. The creature has never existed. It was invented by villagers in the mountains of France and Switzerland to mock city-dwellers who knew nothing of rural animals. You should end with a rich discussion to complete the objective which is to develop participants’ awareness of disinformation.