Back to Library > Communication & Collaboration> 2.4 Collaborating through digital technologies

This document contains background information for facilitators before they run the workshop with participants. It gives an understanding of how to use Openstreetmap, a collaborative map service.

OpenStreetMap (OSM) is a community-led project. It brings together thousands of contributors in order to make accurate street maps of cities and places, freely accessible by everyone.

Note: there are other collaborative map services, for example Google Maps.

Since antiquity right up to the 16th century, cartographic information emerged from formal and technical land surveying, using compasses, measuring chains and optical equipment.  Ptolemy is sometimes thought of as the first cartographer. In 150 C.E., he published Geography, which compiled the geographical knowledge of the 2nd-century Roman Empire. This was one of the first atlases, in which rules were outlined to represent space on a map. The following is an excerpt:

‘…let us first make a statement respecting the degrees of longitude and latitude which have been assigned to well-known places. Approximately these are correct, since the traditions concerning them are continuously the same; that is, in the main the traditions agree. But as to the degrees ascribed to localities not as yet thoroughly explored, because of the incomplete and uncertain knowledge we have of these places, they should be computed rather from their nearness to the localities already laid down, and the more thoroughly explored. This should be done lest any of those localities which have been inserted for completing the whole earth’s picture should be without a fixed and definite place.

In the 20th century, the birth of aviation made cartography exponentially easier and contributed to bringing knowledge to broad audiences in the form of foldable maps – large enough to cover an entire desk. 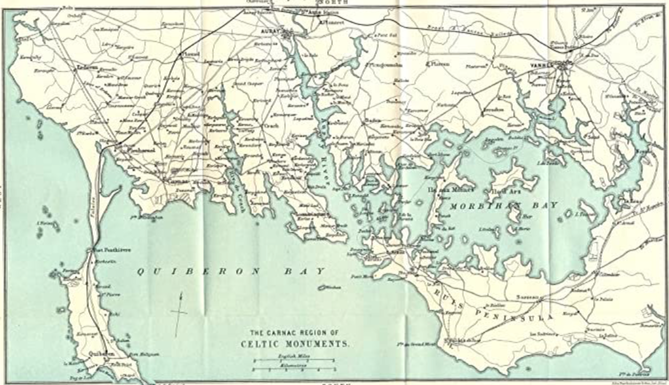 Nowadays, with internet and digital information, and with a smartphone, you have in your pocket a map of the entire world featuring almost all street names of every city. No longer do we need a compass to know which way to point a map – GPS does it for us. However, as magic as this may appear, to keep the maps up to date, information must be supplied continuously. This is the function of OpenStreetMap.

Head to the official site: openstreetmap.org.

If it’s your first time using the service:

If you are using a device on which OsmAnd hasn’t been used before:

If you are using a device on which OsmAnd has been used before:

Once on the homepage, use the search bar to find your city. Use the + and – buttons on the right to change the zoom level and show different scales:

All information visible on the map, each street traced, each building contour, was added by volunteer users. It is these people that form the OSM’s community. Basically, all over the world, clubs organise weekends to conduct geographical surveys in order to contribute to OSM’s database. It is also possible to contribute to the database without weekend excursions for example by adding simple information on a place simply using your smartphone, tablet or computer. This is what we will do during this workshop. This sheet will show you how to add information to OSM that everyone can then consult and edit. As the internet has no borders, information added can be viewed by anyone, regardless of where they are.

Things to do on OSM

A community project requires rules. Imagine a school of 300,000 students without a minimum of rules or discipline. This would quickly become unbearable – there’s no way students would go to class. It’s the same with a project like OSM. So that it works and people participate, some rules are required.

To start, all information validated and published on OSM becomes open data, meaning that anyone is free to copy, distribute and adapt these data, as long as they credit OSM and their contributors. To assure this rule is respected, OSM created a specific license for its content: the ‘Open Data Commons Open Database License (ODbL)’, which provides legal protection.

Here, the key word is self-discipline. Contrary to other projects, OSM depends on the responsibility of each contributor. OSM was created by volunteers surveying terrain, mapping roads, paths, shops and land use. Even if other sources have been added with time, the best method remains fieldwork, and local knowledge has priority.

OpenStreetMap has neither administrators nor any restrictive measures. This project relies on the community to cooperate. For extreme cases of vandalism (rare) or copyright violation, there is however a small group of volunteers who are in charge of damage control (for example by blocking particular accounts).

Configuring and setting up the app

You can use platform online or by downloading the app OsmAnd on App Store or Google Play. 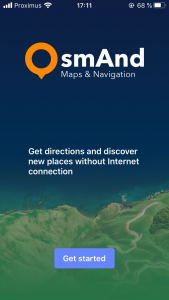 Tap the menu icon on the bottom left of the screen, then choose ‘Maps and Resources’ and download the map for your region. 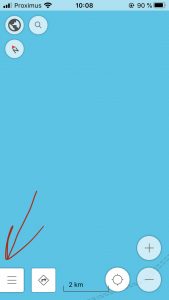 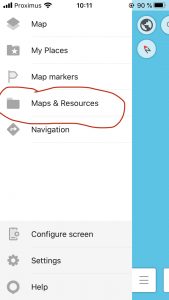 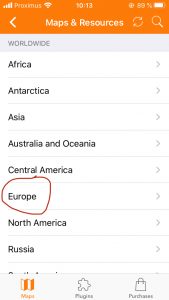 You now have your city’s map available on the app. If your phone’s GPS is activated you will see your position on the map, represented by a blue arrow. Zoom in by pinching the screen with two fingers, or by using + and – on the right until your street appears. 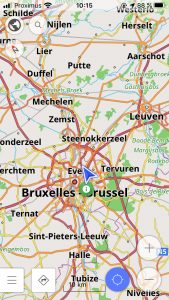 The blue target icon will automatically centre the map on your position.

Editing mode Go back to the menu, select ‘Maps & Resources’, then on the bottom of the screen, ‘Plugins’. 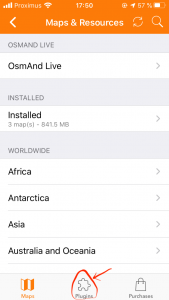 Plugins are extra external features that can be operated within the app. Go to ‘OpenStreetMap Editing’ and tap the tick icon to activate it. The tick will change to orange to indicate that it has now been activated. 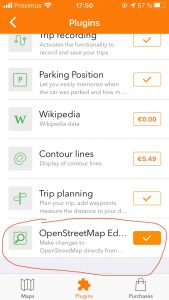 Go back to the map (back arrow on top right) and hold your finger on a certain position on the map. On orange arrow will appear and a menu will open featuring the icon ‘Actions’. 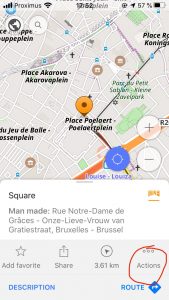 Once ‘Actions’ is selected a new menu appears.

Click on ‘Create POI’, i.e. point of interest. You will now enter the app’s editing mode. (Note: if there is already a POI created in the place you selected, choose ‘Modify POI’ instead.) 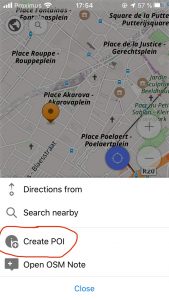 You will now be able to add information to OSM’s huge database. For example, if your school is not yet a point of interest (meaning a place associated with information), you will be able to for example entering its name (if it’s not already there) or any other information you think might be useful. Notice that there is a ‘website’ field on the POI editing field. Enter your school’s website, if it has one. Once you have triple-checked your information, click on Save. If however you have made a mistake you can come back and click ‘Modify POI’ even after the final contribution. 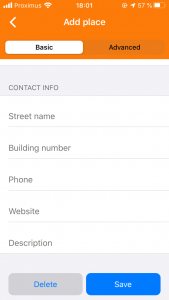 Once saved, notice that the POI created will display its name. For now this will appear on you account but only for you. So that everyone can see it and the accompanying information you may have entered, choose ‘Upload’. 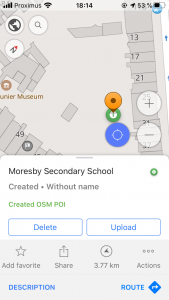 The next screen asks you to enter your OSM account details. Once you confirm, you will have made your details visible to all users and will have contributed to enriching OSM’s database. Congratulations, you have just joined the OSM community! 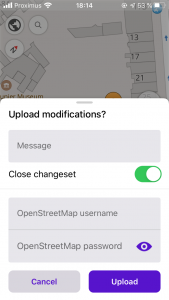 Even if we add information using an app, this is only one way to contribute to the OSM database. This information will not only be accessible via the app and can be found on the OSM website. When giving a workshop on the subject, once your participants’ information is added, go to the website and enter the POI to show that it appears.

You can also edit points on OSM by doing the following: