This document contains background information for facilitators before they run the workshop with participants. It gives some tips on how to avoid some common mistakes when programming with Scratch.

Symptoms: Some elements don’t work, such as collision detection, code with conditions, etc. 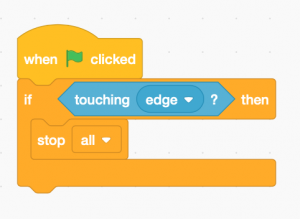 Here, the game will not work since the code only verifies once (at the point of execution) if a condition is true, at which point the code stops. 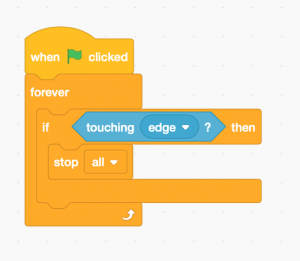 By adding a loop, the computer will constantly check if a condition is true.

A variable does not appear or does not work.

While creating a variable, there are two choices: apply to to all sprites (global variable) or only for one sprite (local variable). Generally, an issue may arise when we use a local variable. 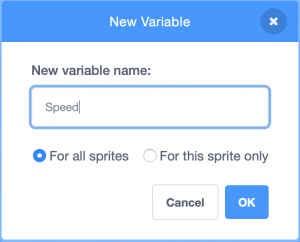 Setting and adding to variables

The value of a variable does not behave the way we want it – it resets itself to 0 at the beginning.

There are two different blocks:

The above block sets the variable to 0. This can be used for example to reset the scores to 0 at the beginning of the game.

This adds 1 to the current value. This can be used to increase a score for example.

Symptoms: A sound is not played.

Cause: To play a sound, first go to the tab entitled ‘Sound’ and import (or record) a sound.

Once this is stored in memory, we need to program when the sound will be played. 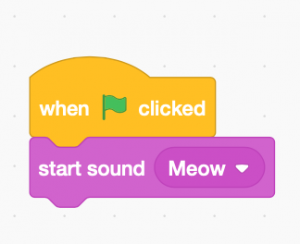 Symptoms: There are blocks missing from the library.

Cause: You are currently in the backdrop window, and since backdrops don’t move, there are no movement blocks. 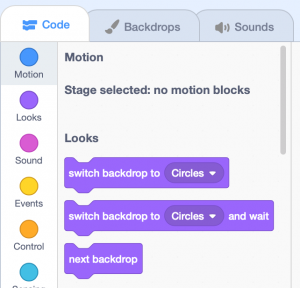 Symptoms: You have placed colour detection blocks, though your sprite does not detect the colour or does so poorly.

Cause: With a block of this type, if the colour appears at all in the backdrop, the condition will be met. 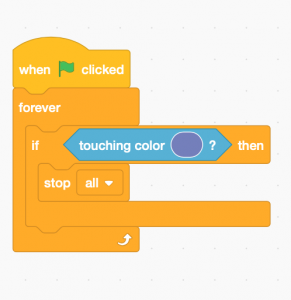 Resolution: Avoid colour detections as much as possible or choose colours which do not appear in your background. (For example, fluorescent green hardly appears in nature).

Some general advice for problem-solving

• Know clearly what you want to do:

If you don’t know exactly what you want to program, there is little chance the computer will understand you.

• Identify clearly what does what:

which code is responsible for which part of the game, which objects manage detections etc.
Feel free to ‘take apart’ the code: 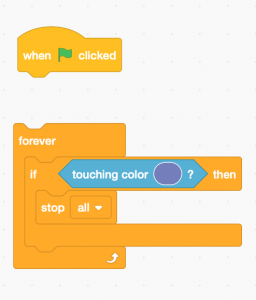 By moving the blocks around like this, the code will no longer be active. This is often useful when we want to identify where an error is coming from.

• Try writing your code/algorithm on a piece of paper: Sometimes errors can become clearer when we think outside the screen for a while.