This workshop activity adresses the notion of data integrity through a card riddle game. The idea is for the facilitator to raise awareness concerning the ability of computers to identify and fix missing links in data travelling over the internet.

36 magnetic cards such as in the form of fridge magnets, with only one side coloured. A metal board for presentation (a steel white board for example). Every pair of participants will need 36 identical cards coloured on one side only (i.e. the face-up side).

This activity will explain the meaning of the term ‘Data Integrity’ used in the context of IT. When a computer or a smartphone is connected to the internet, it sends data to the computers in other parts of the world to which it is connected through the internet. Sometimes, some data is lost. Computers know if data has been modified and they are able to replace or repair it. It is this magic trick that will be reproduced in the workshop.

Facilitation tips: The idea of the activity is that you use magnetic cards of two colours, but you can you use other objects to fill the same role. Whichever objects being able to divided into two clear states would work. For example, you could use playing cards, coins (heads/tails) or cards with a 0 on one side and a 1 on the other, i.e. a binary system.   Before beginning this activity, we advise that you first ensure your group understands the concepts of data and bits.

How does this relate to data?

Being able to spot errors in transmitted data is essential. To illustrate this, imagine you want to deposit 10 euros in a bank account. The banker types the amount and sends the instructions to the bank’s central computer. But if an interference occurs at the moment the amount is transferred and the code denoting 10 euros changes to something denoting 1000 euros instead, we can see how this might be a problem for the bank. The computer receiving an instruction must verify that incumbent data related to this has not been altered. To know whether data has been modified, computers use the same technique the group will use in the card game in the present activity. By placing the imaginary bits, rows and columns and by adding an equal number of bits to every row and column, we will not only be able to detect that there has been an error, but also localise it. The defective bit is thus spotted; the error is corrected.

Ask participants to place the magnetic cards on a white table in the form of a 5×5 square. The distribution of the cards should be random. 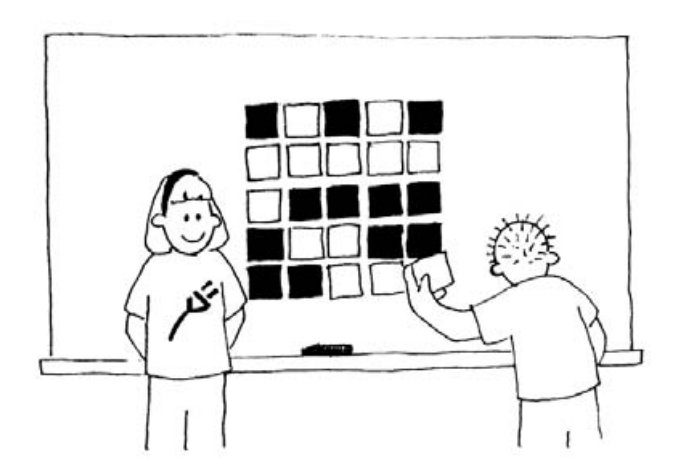 You will now explain that, while you are not looking, one participant must flip a card without saying anything and you will then find it as if by magic! But prior to any of this happening, to give the impression of adding difficulty, you will add one column and one row of cards. 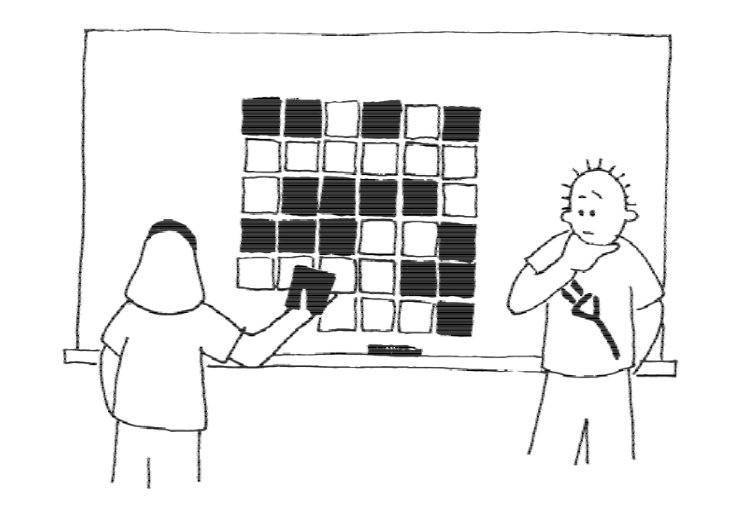 Here is the essence of the trick. Add one column and one row but not without the following logic:

Participants should sit in pairs at different tables. Now give out the cards and they now copy what they saw before. They first make and 5×5 square. Person A adds one row and column ensuring that each includes an uneven number of face-down cards. Person B flips a card. Person A must guess which card changed its state.