This workshop explains the three basic notions of programming: the notion, the loop and the variable. It gives an initiation into programmation, without any tools.

When we hear the word algorithm, we tend to have certain preconceptions. However, algorithms are everywhere in our everyday lives. An algorithm is just a series of instructions that we use to describe a process. Thinking about it this way, a cooking recipe is an algorithm.

What’s more, even your friends adhere to algorithms! Sceptical? Think about that friend who acts like a sore loser when they lose at a game or sport: 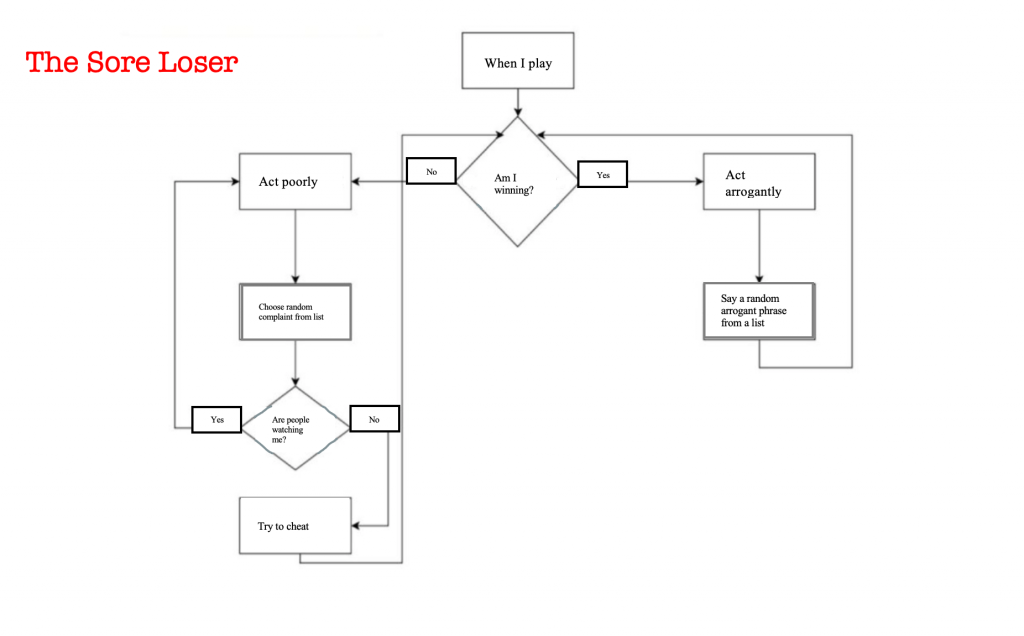 Using this schema, explain to participants what an algorithm is and their 4 main characteristics

Referring to the schema above then, each rectangle is an algorithmic step. The rhombuses meanwhile are tests – questions whose response will lead towards the next action. When we arrive at a rhombus, there are two possible parts to take based on the response.
Facilitation tip: For more information on algorithms, have a look at the workshop plan ‘
Game-based introduction to Algorithms‘.

To start, divide participants into groups and let each person choose a kind of friend they would like to code: party animal, unreliable, conspiratorial, complimentary, know-it-all, musical, etc.

What might be a better alternative idea is to ask them to imagine they are programming a robot in a way that they would have the stereotypical behaviour of a sore loser or a person who is always late (or any of the traits listed above), etc.

This would lower the risk that someone in the group is chosen! Leave them 15-30 minutes according to the time available to think about their algorithm and to design it. Next each group should show their creation to the others.

After each display see if the others have any comments or suggestions about how to improve it. You can also make suggestions yourself.